The Savage conversation occurred on her Twitter fan base. It happened on Wednesday afternoon, 15th December 2021, when she uploaded a post lamenting about transportation issues on Lagos road.

She stated her unfortunate experience when she went to take a photoshoot and was disappointed by a Uber driver who had an encounter with the Lagos traffic jam.
Some fans replied that she was stylishly announcing her new ride which was on the way, while some said she was indirectly begging her fans for a new ride. 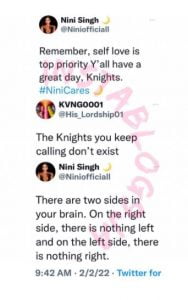