Uche Maduagwu, Nollywood actor, has advised men to stop feeling insecure when their women are richer than them.

The actor took to his Instagram page, he claimed that the marriages of two Yoruba actresses’ are on the verge of collapse because the actress makes money more than her husband.

Uche added that any man who feels threatened by his wife’s wealth should go for counselling because he has a problem.

“Dear men, there is absolutely nothing wrong in #DATING or being MARRIED to a woman that is RICHER than you, it is called REALITY and not an abomination. 90% of #marriages break up for #Nollywood because of this, right now two Yoruba Nollywood #actress marriage is at the verge of breaking up because the popular actress makes more MONEY than her husband, some men are so INSECURE. If your partner’s wealth intimidates you or you think it makes you feel less a man, then you need counselling, her massive wealth no is the problem, Na your insecurities that are.” 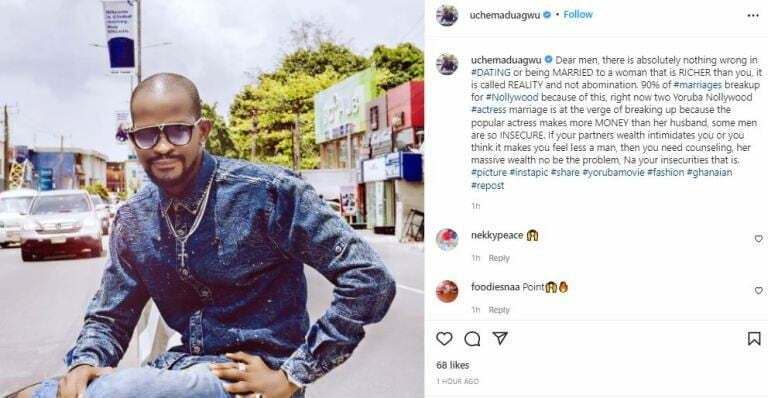