A couple has ended their one-year relationship after the lady insisted her man won’t get down with her until they get married.

According to screenshots of their chat shared online by Twitter user @datchuguy, the young lady insisted that the man must respect her decision not to sleep with her until they are married.

The man however insists that he has needs that must be met by his woman.

They called off their relationship as the lady insists that her principles must be respected by the man.

Read their chat below .. 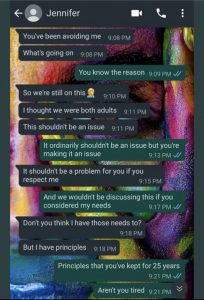 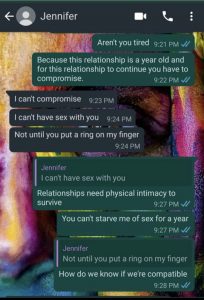 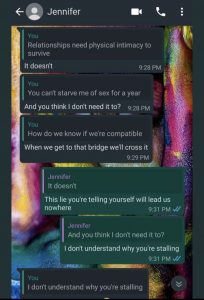 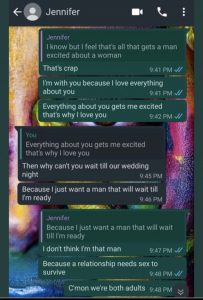 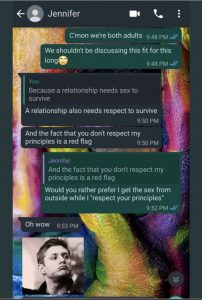 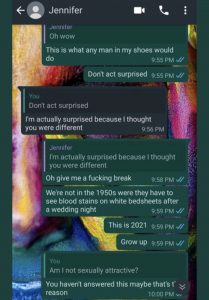 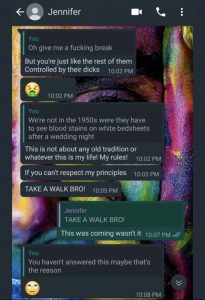 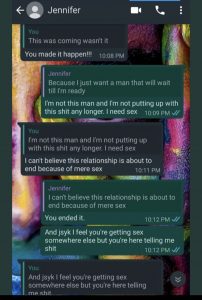 In other news, Nkechi Blessing Sunday, Popular Nollywood actress and influencer, took to social media to shower encomium on herself.

The controversial movie star and influencer took to her instastory to share a video of the pot of stew she was cooking and hailed herself for being a complete package.

According to her the thespian, she has great culinary skills, cleans the house well and can satisfy a man in bed.

Continue reading: “I cook, I clean, and I sabi nack. Full option bay” — Actress, Nkechi Blessing showers praises on herself

Tags
@datchuguy
OlamideJune 10, 2022
5
You may have Missed
Load More
Facebook Twitter Messenger Messenger WhatsApp Telegram
Close
Naijapalaba
Manage Cookie Consent
To provide the best experiences, we use technologies like cookies to store and/or access device information. Consenting to these technologies will allow us to process data such as browsing behavior or unique IDs on this site. Not consenting or withdrawing consent, may adversely affect certain features and functions.
Manage options Manage services Manage vendors Read more about these purposes
View preferences
{title} {title} {title}