In the early hours of Friday, May 20. A lady was rescued after sleepwalking out of her residence.

According to a Twitter user Nwoke Agulu, who shared his experience with the sleepwalker, he and his friend were coming home from the club at 3.10 a.m. on Friday when they saw the lady stepping out of her house.

They were scared because they thought  she was a ghost at first, but luckily his friend recognized her, and they realized she was sleepwalking after calling her numerous times and getting no response.

She’s said to have walked out of her home in a pyjama suit and no shoes. She was hauled back into her room by the men who had found her.

“My experience yesterday night, After clubbing, I came back with my friend around 3.10 am when i was about to open the gate for him to drive in, I saw this girl stepping out, I almost ran because I wasn’t expecting to see anyone at that time. I greeted her but she couldn’t respond

She was wearing pyjamas with no slippers, I felt goosebumps and concluded that she was a ghost, I nearly fainted, but recovered when my friend called her by her name and asked where she was going by that time of the night without slippers, she did not respond

So, my friend came down from his car, we approached her and behold, she was sleepwalking, we dragged her back to her room and her room door was wide open, we locked her up, went back this morning and she was asking how we got her room key after we narrated the story to her and she started crying and was thanking us.” 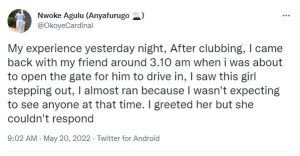 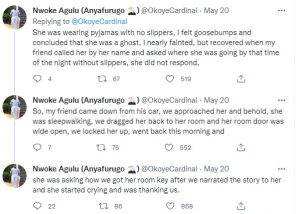