During the previous 10 hours demolition of about 200 buildings by officials of the Lagos State Ministry of Physical Planning and Urban Development alongside security agents and hoodlums, at Oke-Ira community, in the Igbogbo Bayeku Local Council Development Area of the state.Three landlords have reportedly d#ed of shock and eight others are said to be hospitalised. 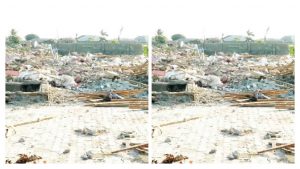 According to punch reports, During the 10-hour demolition exercise, three landlords reportedly d#ed from shock.

At least eight landlords were hospitalised due to the trauma of the demolition.

Even more landlords and residents have been rendered homeless following the demolition.

Naijapalaba.com reported: We lock ourselves in the church for over 20 minutes – Priest speaks on Ondo Catholic massacre

According to the publication, the government team stormed the community with three bulldozers around 10am when some of the landlords and residents had gone to their workplaces.

The report said, without presenting a demolition order, the available landlords and residents alleged that the government officials, led by one Engineer Omotoso, claimed that they were acting on the orders of the state Governor, Babajide Sanwo-Olu.

The affected members of the community alleged that as the demolition was ongoing, the hoodlums in the team prevented them from retrieving their property.

A landlord in the community, Akinkunmi Olapade, told Punch that hundreds of family members were displaced after the demolition.

He said: “The value of my demolished building is N25m. Around 10am, I discovered that some government officials came into the community with policemen, soldiers, hoodlums, and some bulldozers from Lagos State Town Planning.

“They never gave us any notice of demolition; they just came in and started demolishing buildings. As I speak to you, I sleep in my car every day. I left my family at a friend’s place; the room could not contain all of us, so I told them I would find somewhere else to sleep. I have been sleeping in the car.

“The hoodlums injured some of the landlords who were hospitalised. We have recorded two de@ths because as they demolished their houses in their presence, they collapsed and were rushed to hospitals, where they died. One of the dead landlords was Mr Omotayo.”

The Adeboruwa of Igbogbo Kingdom, Oba Semiudeen Kasali, during a visit to the community, appealed for calm as he assured the victims of justice.

He said: “I know there is misdeed in what happened, but God will show us the way. To those that have d#ed, it won’t be in vain. God will let them rest in peace. I have the belief that God’s grace is not limited to a place; God will not forsake you.”

The state Police Public Relations Officer, Benjamin Hundeyin, said he was not aware of the incident.