Olori Memunat Omowunmi Adeyemi, One of the wives of late Alaafin of Oyo celebrates her birthday in the memory of her late husband. 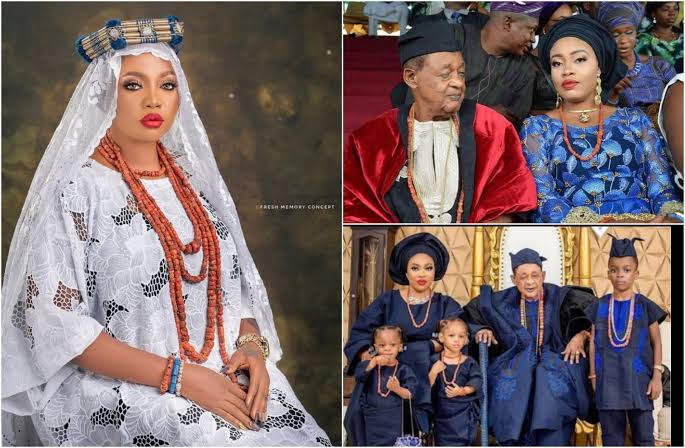 It’s a sad birthday for the wife of the late monarch as she clocks a new age today, May 11 and has decided to mourn the father of her twins on her birthday.

Recall that the Alaafin of Oyo, Lamidi Adeyemi d!ed in April.

According to the Premium Times, The deceased who is the third from the Alowodu Ruling House, d!ed in the late hours of Friday at the Afe Babalola University Teaching Hospital, Ado Ekiti.

The remains of the top Yoruba traditional ruler were brought to Oyo in the early hours of Saturday and traditional rites began.

late Oba Lamidu was 83 years old and he was the longest reigning Alaafin ever, having ruled for 52 years.

The queen who has stayed off social media since his demise took to her Instagram page to eulogise her late husband.

She noted how her husband was more than a husband but a great icon in the Yoruba empire.

Olori Memunat revealed that if there was ever to be a reincarnation, she would automatically return as a member of Adeyemi’s family.

The Olori praised him for being a positive impact and for making her a noticable want in the society.

She wrote, “The world has lost a great icon!!? You’re more than a husband but a great icon in the Yoruba empire. I commiserate with the whole Yoruba kingdom for the lost of an unredeemable being. Your legacy will.live among us. If there would be a reincarnation I’m automatically ADEYEMI’S family. Your positive impact in my life can’t be overlooked, you made me a noticeable woman in the society, I pray may all your children surpass you. Amen!! You will forever live in my heart. ATANDA OMO IBIRONKE!! The History Himself every Odudua lineage would definitely love to always read about you. I’m glad I was happened to be part of smiling chapter of your deed ATANDA OMO MEMUNAT I’m encountering a born day without having you bedside me ever since I’ve been in your kingdom. I beseech Almighty Allah to put your soul at where His beloved belong. Amen! Amen!! Amen!! In nutshell friends, family, and fans be wishing me longevity on earth and fruitfulness for the rest of my life”.