Mercy Eke, former Big Brother Naija Housemate, has asserted that most of the ladies that drag her online truly want to be like her.

There Reality Tv Star stated this in a recent interview with media personality, Taymesan, while speaking on the negative comments and criticisms she’s received since being in the spotlight. 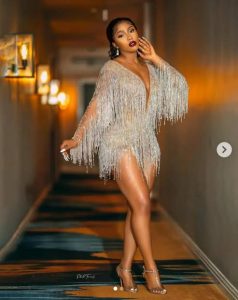 Naijapalaba.com reported: Reality TV star Mercy Eke reveals why she undergo medical surgery to enhance her body as she addresses those criticizing her

According to mercy, the nasty comments get to her because she’s human with blood flowing throwing her veins and she sometimes feels like coming out to defend herself.

“Sometimes it does (get to me) because I am human, especially when lies are told about me, and I cannot defend myself. Sometimes, I just wallow in anger and wish I can say things as they are with proof. The trolling (cyber bullying) hurts me most times because they say horrible things to me.”

“They said I have been married, that I have been pregnant. At this stage of my life, I have to get it right. I am a lover girl and I give love.”

She added that she’s not intimidated by those who criticize her ‘igbotic’ accent because most Nigerian girls also have terrible accents.

“I don’t think anyone can intimidate me. Aside from the proper London girls, most of these girls have horrible accents. I attract people that like the real me. I have nothing to hide, and there is nothing to be intimidated by. I am doing pretty well, and many of the girls (that criticise me) want to be me. They want to be in my circle,” she said.

Tags
Mercy Eke
OlamideJune 12, 2022
25
You may have Missed
Load More
Facebook Twitter Messenger Messenger WhatsApp Telegram
Close
Naijapalaba
Manage Cookie Consent
To provide the best experiences, we use technologies like cookies to store and/or access device information. Consenting to these technologies will allow us to process data such as browsing behavior or unique IDs on this site. Not consenting or withdrawing consent, may adversely affect certain features and functions.
Manage options Manage services Manage vendors Read more about these purposes
View preferences
{title} {title} {title}