Captain Jamil Abubakar, the son of Mohammed Abubakar, former Inspector-General of Police, has said [email protected] the punishment for blasphemy in many religions. 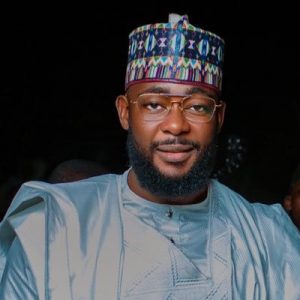 This has caused lots of reactions on social media  .

On Friday night, May 13,  Jamil,  a pilot who got married to billionaire businessman, Aliko Dangote’s daughter, took to Twitter to write about the punishment for blasphemy.

He wrote: “In Islam we respect the Injil, Taura, Zabur, we were never taught to disrespect any of the book, or any of the prophets From Adam to Muhammad SAW & the Quran.

“The punishment for Blasphemy is [email protected]! in most religions including Christianity.
Respect Peoples religion it’s simple!”

He added: “In Islam the Sharia court handles these cases. Islam put rules & regulations to control peoples action and motives, so the wrong ones are not cheated and justice is served the right way.” 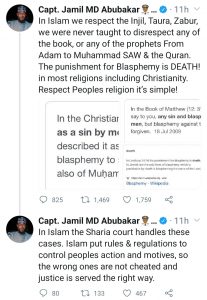 And Jamil responded: “What my personal opinion is, has nothing to do with the rules in place Osi. I didn’t make them, I’m not the sharia court. I live by Islamic faith. I don’t promote Violence.

“The Law is the Law. So this is not about what I think! The laws have been there. Check more on Blasphemy.” 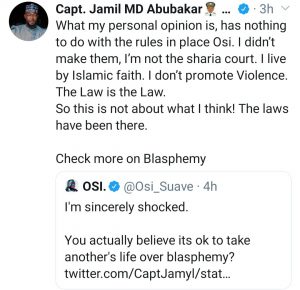