A photoshoot of mother and son has been trending online and has caused negative reactions from social media users.

In the photo, the mother made her son hold her in a s*xually suggestive ways during the photoshoot 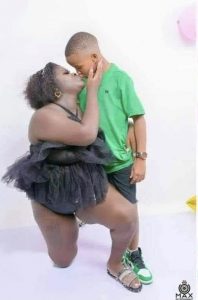 One photo show her kissing the young boy on his lips, another saw her bending down for the child to hold her in infamous doggi position while in another, she used her breast to carress the private parts of the young boy.

see the photo below…

In other news, popular Nigerian celebrity, Actress Regina Chukwu has threatened to attack celebrities who campaign for the ”old men” who according to her sold Nigerians to this present administration.

The actress took to her Instagram page, she said this as Nigerians continue to mourn the de@th of over 50 persons murdered during the massacre that took place at the Ondo state catholic.

Continue reading: Actress Regina Chukwu vows to attack celebrities who campaign for “any of the old men who sold us to this present government”