TG Omori, Nigerian music video director and cinematographer, has said people should do away with cameras when helping the needy.

Omori, stated this in a tweet on Tuesday, May 17, while addressing several societal issues, said acts of giving or helping the poor shouldn’t be publicized.

According to him, oftentimes, the poor have no choice and are forced to live at the mercy of the wealthy.

“Life is hard for the poor don’t film them while giving them bread. Every man has pride na hunger humble them, deep down he doesn’t wish to be on social as the poor one who couldn’t afford bread but I mean a beggar has no choice.” He tweeted. 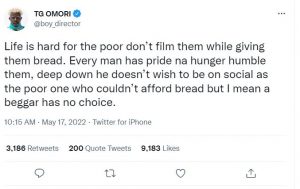