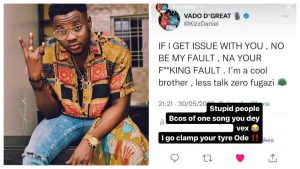 Taking tie his social media, The singer who released ‘Buga’ with his colleague, Tekno issue a warning to people who seem to be jealous and envious of the records the jam broke.

Recall that Buga became the most streamed song on Shazam which is a clear indication as to how viral and widely listened to it became.

“If I get issue with you, no be my fault, na your f**king fault. I’m a cool brother, less talk zero fugazi.”

Posting a screenshot of the tweet on his IG story, he also wrote:

“Stupid people. Bcos of one song you dey vex, I go clamp your tyre Ode!!”

The group of individuals Kizz Daniel is referring to remains unknown. Tags
Kizz Daniel
OlamideMay 31, 2022
1,390
You may have Missed
Load More
Facebook Twitter Messenger Messenger WhatsApp Telegram
Close
Naijapalaba
Manage Cookie Consent
To provide the best experiences, we use technologies like cookies to store and/or access device information. Consenting to these technologies will allow us to process data such as browsing behavior or unique IDs on this site. Not consenting or withdrawing consent, may adversely affect certain features and functions.
Manage options Manage services Manage vendors Read more about these purposes
View preferences
{title} {title} {title}