Nigerian singer, Burna Boy has been trending since last weekend after he performed at Belgravia Sports Club in Harare, Zimbabwe and one of the highlights of the show was getting a bra from one of the concert attendees. 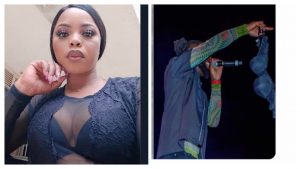 Naijapalaba.com report: Burna boy catches a bra as multiple fans throw their underwear’s at him during a live performance on stage (Video)

Pictures of Burna Boy holding up the bra and performing went viral on social media since the conclusion of the concert and the lady who claims she was the one that threw the bra at him, has come forward, much to the delight of Twitter users.

So I gave him my Bra,,#BurnaBoy to the world.. 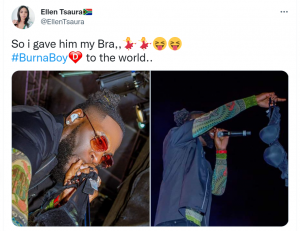 She also shared a photo of her wearing ‘the bra’ before the concert; 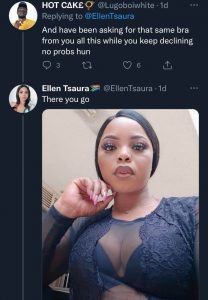 Here’s a video of Burna Boy performing with the bra;

Tags
Burna Boy
OlamideJune 6, 2022
43
You may have Missed
Load More
Facebook Twitter Messenger Messenger WhatsApp Telegram
Close
Naijapalaba
Manage Cookie Consent
To provide the best experiences, we use technologies like cookies to store and/or access device information. Consenting to these technologies will allow us to process data such as browsing behavior or unique IDs on this site. Not consenting or withdrawing consent, may adversely affect certain features and functions.
Manage options Manage services Manage vendors Read more about these purposes
View preferences
{title} {title} {title}