Social Democratic Party (SDP) candidate in Ekiti governorship election, Segun Oni has debunk the rumour that he has withdrawn from the race.

In a fake letter which went viral on social media, Oni was said to have withdrawn and endorsed Bisi Kolawole, his Peoples Democratic Party (PDP) opponent. 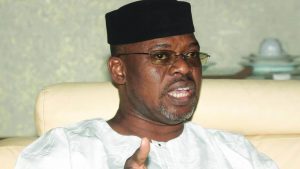 According to the fake letter claimed to have been personally signed by the SDP candidate, It was written that Oni pulled out of the exercise on the eve of the election and told his followers that he had been duped.

Speaking with Daily Trust, Oni said the letter being circulated online is from his ”political enemies who have no good intention for the state.”

Speaking through his media aide Moses Jolayemi, Oni urged the people of the state to go out en masse and vote.

“I am debunking the statement as madness. This is the last phase of their madness. I am urging the people of the state to go out en masse and vote for Segun Oni. If it is the will of God, Oni will win the election today, but if it is not, those people will go down with their madness. Our people should disregard the statement as the handwork of evil people.”

On Sunday, June 12, The former Governor of Ekiti gave the explanation while responding to allegations of being a “notorious defector” at a debate which was organized by Channels TV.

Oni who resigned his membership of the PDP on February 5, days after after failing to secure the party’s ticket, said he left the Peoples Democratic Party (PDP) because of “cheating”.

He said; “I do not like cheating. I don’t cheating and don’t like people to cheat. If I see a party that has no respect for its own rules, I see it as not my type of party.

“I contested the PDP primary and it was supposed to be a secret ballot and the world saw how it became open to the extent that one man was being shown every ballot.

Continue reading: “I detest cheating and don’t collaborate with cheats.” – Segun Oni explain why he dump PDP for SDP