The Microsoft Surface Duo and Samsung Galaxy Z Fold 2 are both technically foldable phones adopting a unique two-part design with a flexible screen or hinge that lets them act as a phone for one-handed use and unfold into a tablet-sized device for multimedia and multitasking. 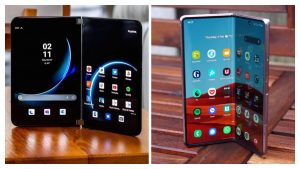 These phones are the most interesting and unique phones on the market today. Both are folding phones, We took a look at both phones, comparing their design, display quality, specs, and more to help you decide which one to get. 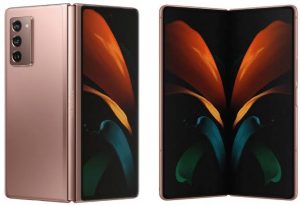 The Samsung Galaxy Z Fold2 has a broad resemblance to a Note 20 when looked at from the back. It has a plastic edge-to-edge screen on the front, a glass back, and an aluminum frame. When snapped closed, it looks like two phones stacked on top of each other making it slightly thick. There’s a triple camera array on the back, along with a pair of selfie cameras on the front. Because the front of the screen is plastic, it’s not as durable as glass and may be prone to scratches (it comes with a screen protector installed by default).

Naijapalaba.com report: Best iPhones in 2022: Which iPhone Is Best for You?

When you unfold the screen, it comes out to 7.6 inches, while folded it has a 6.23-inch cover display. The screen resolution is a crisp 2208×1768 pixels, which works out to 373ppi. The screen is a foldable version of Samsung’s AMOLED, giving you bright and vivid colors boosted by HDR10+. The panel is also a high refresh display at 120Hz, giving you smooth motion and transitions, especially for multimedia and games. 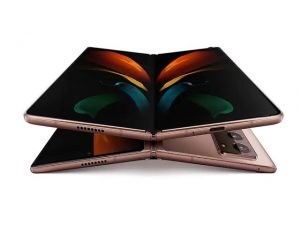 The Surface Duo is quite different from the Z Fold2 in design Rather than having a folding screen, it’s actually two screens connected by a hinge in the middle.

Read also: Here Are The 9 Best Smartphones of 2022 for Everyone

The screen itself is of middling quality. It’s 5.6 inches folded and 8.1 inches unfolded, making it slightly bigger than the Z Fold2. It has 2700×12800 pixels, working out to a crisp 401ppi. It’s also AMOLED so you get deep blacks and nice colors, but it’s not a high refresh panel nor rated for HDR10+, so you’ll be missing smoothness and dynamic range.

Samsung has packed the Z Fold2 with specs on par with its flagship phone lineup. You get a Snapdragon 865+ processor, which is the best Android chipset on the market. It has 12GB of RAM and 256GB/512GB internal storage. Multitasking and demanding games shouldn’t be a problem to run despite the large and hungry display.

The camera setup consists of three 12MP sensors: a standard wide-angle sensor, a telephoto sensor for 2x optical zoom, and an ultrawide sensor. Pictures are on par with the Note20 Ultra and other high-end Samsung phones. It can also record 4K video at 60fps, and there are a pair of 10MP selfie cameras on the front. 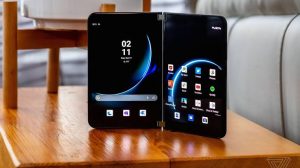 The Microsoft Surface Duo isn’t nearly as capable as the Z Fold2. It’s powered by a somewhat older Snapdragon 855 chipset, has 6GB of RAM, and 128GB/256GB storage. While apps and games should still run fine, for the most part, it won’t score nearly as well in benchmark tests and might chug more for running lots of apps side by side.

Camera capabilities are even more shortchanged. There’s just a single 11MP rear sensor with no other sensors for telephoto zoom or ultrawide shots. It can record 4K at 60fps. There’s also no selfie camera, instead, it simply uses the rear camera for selfies.

Both the Z Fold2 and Surface Duo run on Android 10. Samsung has its custom One UI skin on top, giving you a variety of features, Samsung apps, and things like the Bixby voice assistant. There are also several customizations for multitasking to help you run apps side by side, split the screen, Samsung DeX, and more. The S Pen doesn’t work for the phone currently. The Z Fold2 has full 5G connectivity. 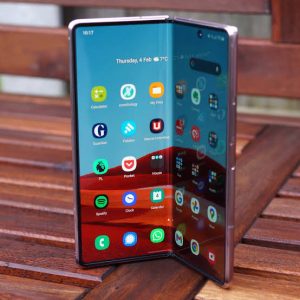 At MSRP the Samsung Galaxy Z Fold2 will run you $2,000, making it one of the most expensive phones you can get, though many carriers are offering it for $1,000 with a trade-in. The Microsoft Surface Duo is cheaper at $1,400 and is currently on sale for $1,200, which makes sense since there aren’t nearly as many high-end components or features packed on.