Huddah Monroe, Kenyan socialite, has said she does not wear pants because her pussy is too “fresh to be wrapped up.” 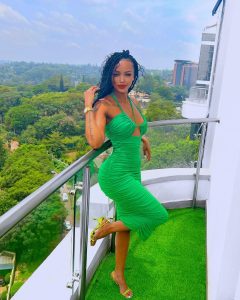 According to the former Big Brother Africa housemate, pants are for people with smelly vagina. 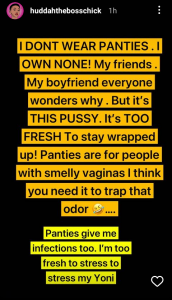 In other news, Nkechi Blessing, Popular Nollywood actress, has revealed that she dips her finger into her private part sometimes and put the same finger in her mouth.
Read also: “I left because of personal hygiene, You have to tell a woman to brush her teeth in the morning?”- Nkechi ex lover, Opeyemi falegan dismiss claims that he apologise to her because he wants her back (video)
Nkechi blessing revealed this while addressing her estranged lover, Opeyemi falegan claims that she lacks personal hygiene.
He also claimed that she won’t brush sometimes throughout a day. On Thursday, May 12, Nkechi blessing denied his claims in a series of posts shared on her Instastory, where she disclosed that she hasn’t worn panties she was 18.
According to the actress, she uses tampon, cotton wool, or menstrual cup when she’s on her menstrual cycle, instead of sanitary pads which requires panties.

Trending
5 BBNaija Housemates Who Look So Much Like Their Mother(photos)
One would have thought the drama has ended there but it hasn’t. The 33-year-old actress granted an interview with Daddy Freeze today, May 13 to prove her ex’s allegation wrong beyond a reasonable doubt.

In the interview, the actress insisted that she hasn’t worn a pant in over 15 years and wears body suit in place of panties when necessary.
She also debunked her ex’s claim that she is dirty, stating that she’s so clean down there that she inserts her finger in her private part and puts the same finger in her mouth.

Continue Reading: “I am so clean, I insert my hand in my private part and put in my mouth” — Actress Nkechi Blessing denies Opeyemi falegan’s claim that she’s dirty