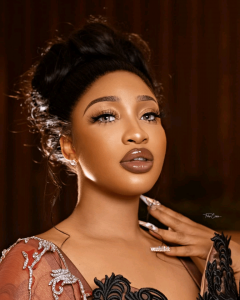 Tonto Dikeh broke the news some days ago for gloating after her ex-lover, Kpokpogri cried out on social media that his expensive house in Abuja was being destroyed by FCDA

She had taken to her page to show off that what’s happening to Kpokpogri is the as a result of him messing with the wrong woman. 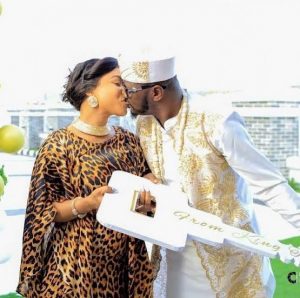 Many people criticized Tonto Dike for rejoicing over someone’s fall but Tonto shut those critics down.

Not quite long, Kemi Olunloyo had a live session with Kpokpogri and she asked if Tonto Dikeh had a hand in the destroying of his house. Kpokpogri disclosed that she wasn’t responsible for the demolishing and Kemi retorted that Tonto was only laughing at her ex-lover because of clout.

Tonto Dikeh, in her reaction, took to her Instastory to write;

It’s like Kemi wants me to talk to her or something..

Na Ogun go help me put her back for jail.

Make we start to do goFundMe for you again, Agbaya!! Olodo. 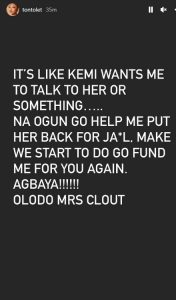