OAP Daddyfreeze made it clear to people that anyone who walked out of an unhappy marriage is a success not a failure.

According to his post he shared on Instagram, DaddyFreeze who is a divorcee said he didn’t fail in his first marriage but rather he succeeded in divorcing himself from toxicity. He opined that those who failed in marriage are the ones who couldn’t make it alive.

”If anyone discriminates against you as a divorcee, stand up to them, beat your chest and say:

I didn’t fail at marriage; instead I succeeded in divorcing myself from toxicity. Those who actually failed in marriage are the ones who couldn’t make it out alive! If you made it out of suffering alive, you are a success, NOT a failure!
~FRZ” 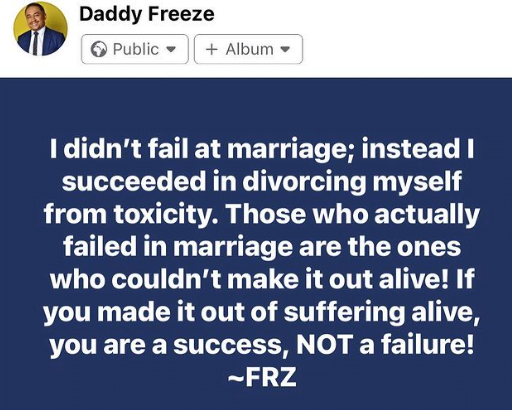