Idris Okuneye, Nigerian crossdresser, popularly known as Bobrisky, has shut the mouth of those claiming she’s now broke as she shares her jaw dropping account balance.

Naijapalaba.com report: “I can be calm but bobrisky the IDAMU ADUGBO is always ready to fight !!!!!” – Bobrisky takes over Kemi Olunloyo’s fight as she blasts Tonto Dikeh 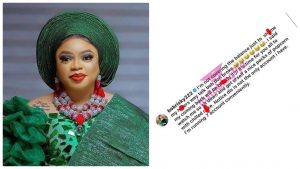 The controversial Instagram celebrity has been receiving bashing from social media users after he announced a pre-party warming for a house he allegedly rented according to a popular blogger.

The transvestite who is planning to host a housewarming party on June 19th, took to her Instagram page to share a copy of the invitation.

However, some netizens accused Bobrisky of lying about owning a mansion in Lagos, talk more of opening the house because he can’t possibly afford it.

In reaction to the negative criticisms, the 30-year-old crossdresser shared a screenshot of his bank balance on his Instagram page.

“I’m not covering the balance just to shame my haters wey talk Bob don broke. I said my coming back will be bloody!!! It’s time for you all to watch me so sit down and get yourself a nice pack of popcorn with chilled coke. Notice dis is not the only account I have. I’m running 7 account conveniently.”