A newborn baby wrapped in a polythene bag was found de@d in Birnin Kebbi, the Kebbi State capital.

Naijapalaba.com reported: A staff of Ondo State Agency Against Sexual and Gender-Based Violence (OSAA-GBV) shared photo of woman butchered by her boyfriend in Akure (graphic)

According Abubakar Sambawa, Facebook user, the baby was found dumped along a road in Badariya area of Birnn Kebbi on Sunday morning, May 22. 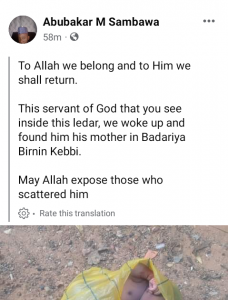 In other news, A sound engineer identified as David, has been burnt to de@d allegedly by a group of commercial motorcyclists in Lagos.

David who was on his way home from club when he allegedly got into a misunderstanding with a commercial motorcyclist in lekki phase 1 because of N100 balance. This resulted in a f!ght between David and the motorcyclist.

More commercial motorcyclists got involved and allegedly joined their colleague to be@t David until he became unconscious.

Continue reading: Must Read: Sound engineer be@ten and burnt to de@th allegedly by a group of commercial motorcyclists following disagreement over N100 balance