An identified woman has allegedly turned into a cow after sleeping with married man.

The woman’s legs reportedly turned into cow hooves and she also has a tail. 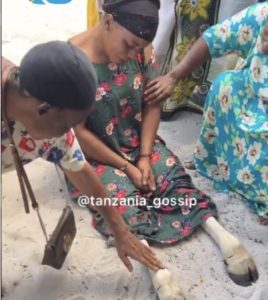 Reporting from an unconfirmed rumours, it was reported that the woman in the viral video is alleged to have snatched someone else’s husband and the husband’s wife reportedly bewitched her.

On the other hand, some are speculating that she slept with a married man and her legs mysteriously turned into those of a cow.

The video has got social media talking as people are quite sceptical of the authenticity of the video.

A number of people think that this is just a made up story. Critics quickly noticed the uncanny resemblance that is apparent in this video and the other video which went viral.