Big Brother Naija stars, Jackie Bent and Michael Sensei, have left a lot of fans and shippers shocked after disclosing that they were never in a relationship. 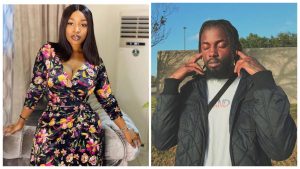 This comes following the drama on an episode of the Reunion Show that some fans tagged as ’embarrassing’ to watch.

This two were really fond of each other during the sixth edition of the popular reality show and were believed to share a special bond.

Naijapalaba.com reported: Reality TV star Mercy Eke reveals why she undergo medical surgery to enhance her body as she addresses those criticizing her

They also said they would like to pursue a relationship outside the house and seemed to play the part as they went on a couple of dates together and shared pictures on social media.

However, during the ongoing Reunion show, Michael hinted that their relationship had hit the rocks after putting Jackie B in the friendzone.

“I think she’s a very good friend of mine,”he said.

This statement caught the attention of fans who went online to share their speculations and conspiracy theories about the duo. Some also criticized Michael for friend-zoning the curvaceous mother of one.

Reacting to the critics, Jackie took to Twitter to disclose that she and Michael never dated because she chose not to pursue a relationship with him.

“Lol chill my loves, Michael and I never dated and aren’t after a relationship. It was my decision that we remained friends. We’ve never felt the need to explain ourselves to anyone. There’s nothing to be embarrassed by. It’s still not that deep. 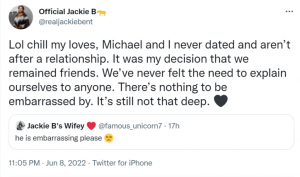 Michael also went online to address those castigating Jackie for ‘throwing herself’ at him in the house.

“JB never “chased” me & we never “broke up.” we’ve had a mutual friendship that’s been understood amongst ourselves from the beginning.
–
stop the insensitive trolling directed towards her online.
–
GOD bless.

let’s be rational please.
–
“i think…” is a common expression of thought. it was in no way an insinuation of uncertainty.
–
attraction is a mutual occurrence that isn’t restricted to the confines of romance.
–
we understand each other as good friends who have grown together.” 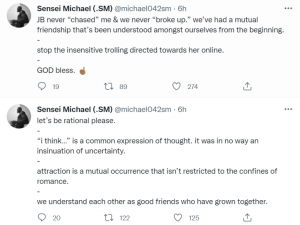