Caramel Plugg, Popular Instagram comedienne, turned a year older today and the day came with loads of gifts from her friends, loved ones and her lover. 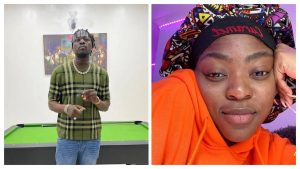 Shortly after her boyfriend King Manny, who is also Burna Boy’s PA took to his Instastory to unveil her as his girlfriend, she revealed that she received N1m from him.

Caramel also revealed that she received dollars from Burna Boy, who she described as her “baby’s friend”.

In other news, Eriata Ese, Reality TV star and actress, took to her social media to lament bitterly about the struggles of being a hardworking woman.

BBNaija star who had a stressful day on a movie set on Friday, May 29, said she was tired of working hard and putting in a lot of effort into her job.

According to her, she was wrong to believe that the more money she earns, the more time she would have to relax and have fun, because now she’s focused on earning more money.

The 24-year-old further stated that she totally understands women who date and marry a man because of his money, because working hard for one’s money is not easy.

Continue reading: “I’m really tired of being hardworking, I can’t even blame women who marry or date for financial support” – Eriata Ese laments