The estranged wife of Nollywood actor, Blossom Chukwujeku, Maureen Esisi has shared a direct message someone left her on Instagram, saying a friend is willing to pay to have a nice time with her.

Naijapalaba.com report: “It is better to marry an Ehinome than a woman who twerks on Instagram” – Twitter influencer, Sally blast those body-shaming Blossom’s new wife 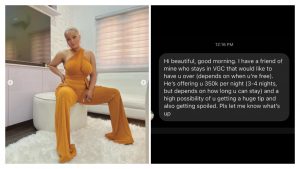 In the message, which she shared on her Instagram page, the sender wrote that a friend who stays at VGC is offering her N350k per night to spend 3-4 nights with him.

The sender also went on to say that there is a possibility of her getting a huge tip and getting spoiled if she accepts the offer. 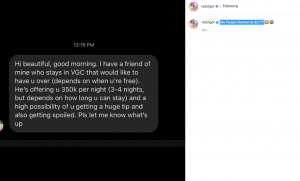 In other news, Maureen Esisi has tendered a public apology for the comment she made after a troll laughed at her ex-husband, actor Blossom Chukwujekwu’s new wife, Ehinome.

Blossom tied the knot with Ehinome on Friday, May 20, in a ceremony in Benin. Some Nigerians stormed Maureen’s page to mock Ehinome, saying she is not as hot as Maureen.

Maureen while responding, laughed, a decision many felt was insensitive.

Maureen apologize,  in a post she shared on her page this morning, she also clarified that her comment wasn’t directed at Ehinome. According to her, no bride needs to be trolled on her big day. See her post below…

“No bride needs to be trolled on her big day”- Maureen Esisi apologizes for trolling her ex-husband, actor Chukwujekwu’s new wife