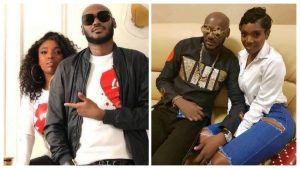 Tuface idibia’s wife, Annie Idibia was in the news recently after it appeared that she’d unfollowed her husband on Instagram and it elicited reactions/speculation that all wasn’t well in her marriage to the singer.

The father-of-7 has now given a reaction and he took a jibe at how people read meaning into everything.

He captioned the video thus;

“Una can like to read nonsense meaning to everything. Can’t somebody feel free again.”

Meanwhile the management of Annie Idibia has released a statement with regards to the Instagram glitch that made it look like the actress unfollowed her husband on Instagram.

This statement comes after Annie said she didn’t unfollow Tuface and an Instagram glitch was what made it seem so.

The actress’ management reiterated her words that the problem was caused by a glitch. Due to this glitch, the actress has noticed “an inexplicable decline in following” and this has been going on for several month.