A 20 year old boy identified as Chidera Ezekiel Uzoma, has d#ed in the Ikoyi Custodial Centre where he was remanded over his employer’s stolen bicycle. 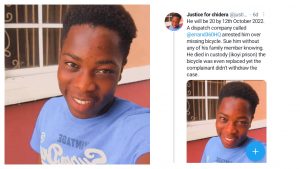 It was gathered that 20-year-old Chidera, who worked with a dispatch company, Errand360NG Technology Services Limited, was arrested and charged to court after he reported the theft of the bicycle to the company.

According to a Twitter user, Oluchi @General_Oluchi, who disclosed this in a series of tweets, said the deceased who had been in prison custody since March 2022, was found de@d on April 24.

“Can we talk about this case? 20-year-old Chidera Uzoma started working for errand360HQ as a delivery guy and one morning, he discovered that the work bike he parked in front of his apartment was missing. He informed the company and they arrested and charged him in court,” the account tweeted.

“Since then, his brother @justice4ezekiel  has been tweeting about, but but errand360HQ keeping quiet. Ikoyi Prison said Chidera was sick for a while before he died. His family needs closure because the circumstances surrounding his death is mysterious. Please help this young man get Justice by tagging necessary handles. #justiceforchidera”

Meanwhile, the deceased’s brother Samuel, has taken to Twitter to demand justice.

“He will be 20 by 12th October 2022. A dispatch company called errand360HQ arrested him over missing bicycle. Sue him without any of his family member knowing. He died in custody (ikoyi prison) the bicycle was even replaced yet the complainant didn’t withdraw the case,” Samuel wrote.

“Yesterday I was at the mortuary 4 the 2nd time. I was telling my brother “bro bushman don come Lag o, come teach me how to drag bus. He couldn’t even look at me.He laid there like a log of wood. Nigerians help me ask errand360HQwhat happened to chidera. #justiceforchidera”

According to the company’s statement on Wednesday May 25th, presented details of the series of events that necessited the involvement of the police in the case against the deceased.

According to the statement, the deceased took the company’s bicycle home on February 14, 2022, and failed to return it only to later claim it was stolen.

“Upon internal investigation and speaking to Mr Ezekiel, the company did not find the story of the bicycle being stolen credible, and so he was requested to return the missing bicycle,” the statement.

Days after the incident, unknown persons broke into the company’s Maintainance Building on February 2022.

The security personnel at the facility on the day reportedly identified Ezekiel as one of those who broke in.

During investigation into the incident, police visited the deceased’s residence where some of the company’s bicycle parts were allegedly found.

“Based on this, the police arrested him and took him into custody for investigation and arraignment.”

The company stated that he was arraigned before a magistrate’s court and from then on, every due process was followed.

“On April 4, a replacement for the missing bicycle was provided. The company went to court and attempted an early withdrawal of the case, despite the next date of hearing being June 8. However, Ezekiel’s presence was required in court but authorities could not provide him before the court.

“We value the well-being of all our riders and employees and are deeply saddened by Mr Ezekiel’s passing. The company followed due process by escalating the matter to the police for appropriate investigation and arraignment.” 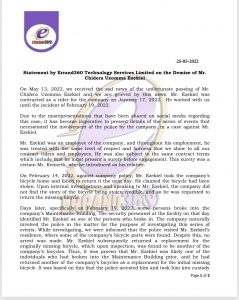 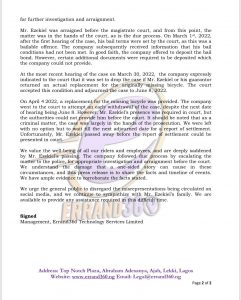 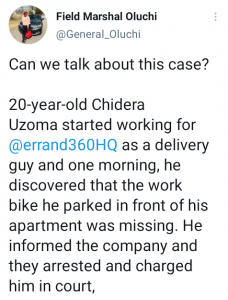 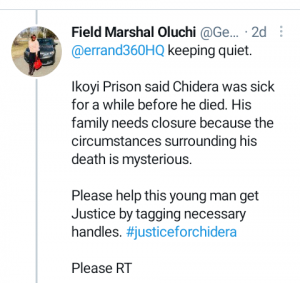 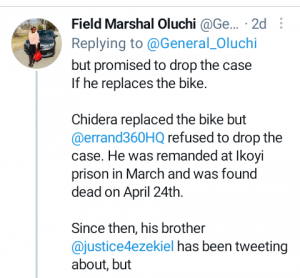 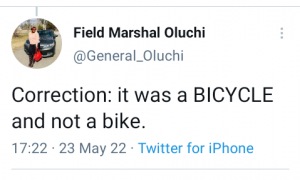 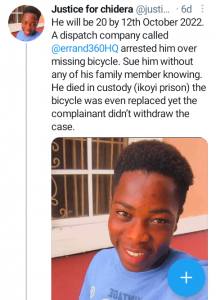 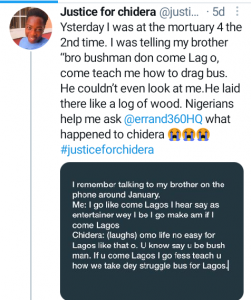 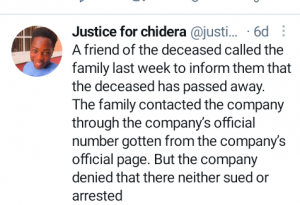 Tags
Arrested Delivery boy
OlamideMay 26, 2022
726
You may have Missed
Load More
Facebook Twitter Messenger Messenger WhatsApp Telegram
Close
Naijapalaba
Manage Cookie Consent
To provide the best experiences, we use technologies like cookies to store and/or access device information. Consenting to these technologies will allow us to process data such as browsing behavior or unique IDs on this site. Not consenting or withdrawing consent, may adversely affect certain features and functions.
Manage options Manage services Manage vendors Read more about these purposes
View preferences
{title} {title} {title}