Korra Obidi has released a video showing Justin Dean and a 19 year old Brazillian woman identified as Gabby to back her claims that Justin was the one who cheated in their marriage.

In a photo that was posted by Gabby in June 2021 shows her and Justin together. 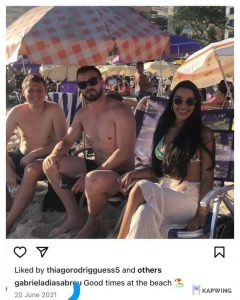 In a recent video shared by Korra, it shows Gabby k#ssing Justin on the head. 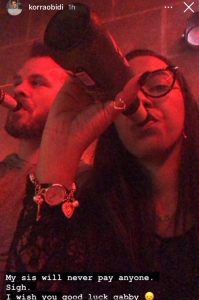 ”#NoSilence” Korra added as she reacted to Justin’s accusation that she cheated on him while she was pregnant with their second child Athena.

Justin intially accused Korra of infidelity immediately after he announced he was divorcing her.

He later released a video to apologise and he said his accusation of infidelity was false.

But now, with Korra accusing him of infidelity, he is back claiming that Korra cheated on him.

Watch the video of Justin and the lady below.

Meanwhile in a previous post, Korra Obidi, Popular Nigerian Dancer and Singer, took to her Instagram page recently to call out her ex husband and father of her two kids, Justine Dean, to accuse him of stealing her money.

The mother of two revealed that he took the money from their joint account after she mistakenly sent it to a PayPal account it was linked to. She accused him of wanting her and her girls to live in the streets, and doing all these after she had just given birth.

In her words: “I did not want to speak about my divorce in public, it was a decision I made, knowing that the internet never forgets and considering that I’m putting my children first.

“But at this juncture, I have no choice but to do what I’m doing right now.

“I have a lot of bills to pay including a $21,000 meant for the lawyer over their divorce case. Justin has not been responsible for any bills even though he caused all of them.”

“He just wants us to be homeless. I made the money for my girls, from my promotion, I sent it for rent, but he’s stealing from us. “I know I have to be strong, but this is someone that comes online tarnishing my image and my reputation.”