In another bizarre incident, A Japanese man has fulfilled his unique dream of transforming himself into an animal and that too a dog, The man got himself transformed into a breed named “collie” by a professional agency called Zeppet, he paid a large sum of money for a “life-sized” dog costume. 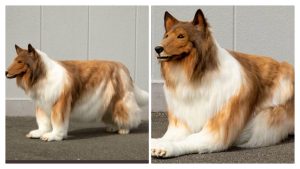 The man commissioned a professional agency named Zeppet and asked it to make him a costume of a Collie — which is a dog breed, NDTV reported.

The company took 40 days to make the costume and charged more than two million yen for it. 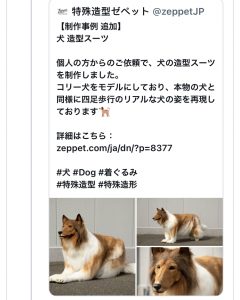 Talking about why he chose to become a collie, the man said: “I made it a collie because it looks real when I put it on. My favorite is quadrupedal animals, especially cute ones. Among them, I thought that a big animal close to me would be good, considering that it would be a realistic model, so I decided to make it a dog. Long-haired dogs can mislead the human figure. I met such a condition and made Collie, my favorite breed of dog.”

Sharing the pictures on Twitter, the company said: “At the request of an individual, we made a dog modelling suit. Modelled after a collie dog, it reproduces the appearance of a real dog walking on four legs like a real dog.”

Tags
Fulfilled his dream Japanese man Of becoming a dog.
OlamideMay 31, 2022
2
You may have Missed
Load More
Facebook Twitter Messenger Messenger WhatsApp Telegram
Close
Naijapalaba
Manage Cookie Consent
To provide the best experiences, we use technologies like cookies to store and/or access device information. Consenting to these technologies will allow us to process data such as browsing behavior or unique IDs on this site. Not consenting or withdrawing consent, may adversely affect certain features and functions.
Manage options Manage services Manage vendors Read more about these purposes
View preferences
{title} {title} {title}