Adamu Garba, Politician and former APC Presidential hopeful, says insulting Prophet Mohammed is one of the uncompromising redlines of any Muslim. 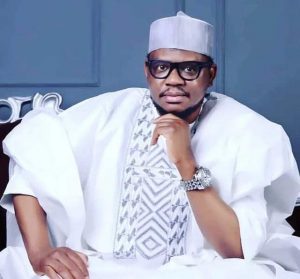 Adamu made this statement on his Twitter handle this morning. His tweet comes days after Sokoto student, Deborah Samuel, was murdered over allegations of blasphemy. 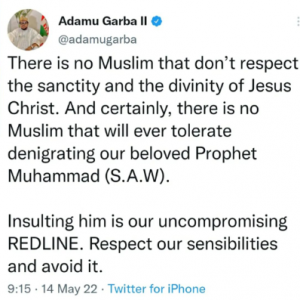 Meanwhile in an earlier post, Captain Jamil Abubakar, the son of Mohammed Abubakar, former Inspector-General of Police, said [email protected] the punishment for blasphemy in many religions.

This has caused lots of reactions on social media.

On Friday night, May 13,  Jamil,  a pilot who got married to billionaire businessman, Aliko Dangote’s daughter, took to Twitter to write about the punishment for blasphemy.

He wrote: “In Islam we respect the Injil, Taura, Zabur, we were never taught to disrespect any of the book, or any of the prophets From Adam to Muhammad SAW & the Quran.

“The punishment for Blasphemy is [email protected]! in most religions including Christianity. Respect Peoples religion it’s simple!”

He added: “In Islam the Sharia court handles these cases. Islam put rules & regulations to control peoples action and motives, so the wrong ones are not cheated and justice is served the right way.”

And Jamil responded: “What my personal opinion is, has nothing to do with the rules in place Osi. I didn’t make them, I’m not the sharia court. I live by Islamic faith. I don’t promote Violence.

“The Law is the Law. So this is not about what I think! The laws have been there. Check more on Blasphemy.”