Rotimi Akeredolu, Chairman of the Southern Governors’ Forum has again weighed in on the widespread insecurity witnsessed across the country. 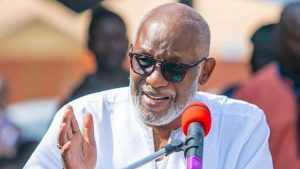 While the Ondo State Governor was delivering a keynote address at the opening of the ongoing Attorneys-General of the 36 States, he noted that police is overwhelmed.

Akeredolu also said the police blamed non-availabilty of vehicles for their inability to mobilise to the scene of the recent Owo attack, asked the Police to “close shop” if the Federal Government could not meet its equipment needs.

The Governor also challenged states to restructure the country by, among others, setting up their own anti-graft agencies.

He also said Nigerians might be forced to bear arms soon as the mass k!llings, kidnappings and other serious security failures around the country had shown that a central police command was ineffective to keep Nigerians safe.

“The Police have failed.

“We will carry arms very soon. Oga Malami. There is no other way.”

In other news, In a chat with Daily trust, The Nigeria Police Force said is aware and punishing officials that work with internet fraudsters popularly known as yahoo boys.

SP Benjamin Hundeyin, Lagos State Police Public Relations Officer, who admitted that some officers connive with yahoo boys in a chat with Daily Trust on its Twitter Spaces on Wednesday June 15, revealed that anytime such offenders are caught, they are dealt with severely.

He said; “In every organisation, you would have those officers that would always undermine the efforts of the organisation. I’ve heard about officers working in cahoot with internet fraudsters.

These officers are treated worse than the internet fraudsters.

“If a law enforcement officer engages in a crime, he receives more punishment than an ordinary citizen because he is expected to know more.

“All the time when we get to know about such officers, they are severely dealt with.” Hundeyin persuade the public to provide the force with information whenever they hear of such cases.

Tags
Rotimi Akeredolu
OlamideJune 16, 2022
5
You may have Missed
Load More
Facebook Twitter Messenger Messenger WhatsApp Telegram
Close
Naijapalaba
Manage Cookie Consent
To provide the best experiences, we use technologies like cookies to store and/or access device information. Consenting to these technologies will allow us to process data such as browsing behavior or unique IDs on this site. Not consenting or withdrawing consent, may adversely affect certain features and functions.
Manage options Manage services Manage vendors Read more about these purposes
View preferences
{title} {title} {title}