A Nigerian man identified as Eminent Ali, has declared his plan to start a fight against indecent dressing in Bayelsa state.

On Wednesday, June 15, The popular MC in the state identified as Eminent Alu, announced his plan to flog ladies in the state who are indecently dressed in what he tagged “the fight against indecent dressing.” 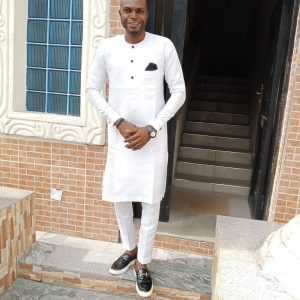 According to eminent, his campaign against indecent dressing in the state will start on Saturday, June 18.

“NOTICE NOTICE NOTICE. I will soon start my operations fight against indecent dressing in bayelsa State. I will be carrying Water cane rubbed with Peper around the street of Yenagoa to flog heal out of those half naked girls walking in the street of yenagoa, starting from Saturday 18th. The general public should take note. Mc Wolowolo”. 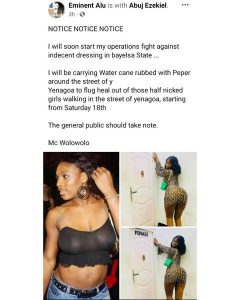 In other news, Mandy Kiss, Well known content creator, who is known for her content as president of ‘olosho’ has made a U-turn about her self-acclaimed position.

In an emotional video shared by the media personality, Mandy kiss who is known for sharing vulgar and s*xual contents on social media said she’s not a prostitute but created the online personality to fend for herself and her family.

According to the brand influencer, people misunderstood her and thinks she’s really a prostitute and she has lost a lot of good friends due to this. She added that she has never slept with a man in exchange for money, and she has only sleep with people she was in a relationship with.

The contents creator broke down in tears and said she doesn’t have a boyfriend or any man she can call hers because they all think she’s a wayward call girl.

She maintained that she’s a good girl who deserves to enjoy the good things of life, including getting married. Mandy further stated that she might her content on social media.

Continue reading: “I’m not an Olosho. Everything I do on this social media is just a way to survive and fend my family” — Self-acclaimed “President of Olosho”, Mandy Kiss says as she break down in tears

Tags
Eminent Alu
OlamideJune 16, 2022
17
You may have Missed
Load More
Facebook Twitter Messenger Messenger WhatsApp Telegram
Close
Naijapalaba
Manage Cookie Consent
To provide the best experiences, we use technologies like cookies to store and/or access device information. Consenting to these technologies will allow us to process data such as browsing behavior or unique IDs on this site. Not consenting or withdrawing consent, may adversely affect certain features and functions.
Manage options Manage services Manage vendors Read more about these purposes
View preferences
{title} {title} {title}