Tiwa Savage , Nigerian popular singer, has revealed that wealth isn’t what she looks for in a man. 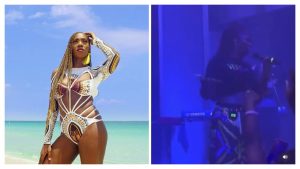 The 42 year old singer made this revelation while performing at her show in Dallas.

Naijapalaba.com report: “Stop dating men in their 20s if you want to get married” – Lady advises single women (video)

The mother of one stated that she has her own money, so she isn’t particular about finding a wealthy man. Her type of man, she says, is the one who matches her energy and vibe.

She added that she can walk away from unpleasant situations because she has her own money and is not reliant on any man.

Her remark garnered ecstatic responses from the crowd of female fans, who appeared to back her decision wholeheartedly.

Watch her speak below,

Tags
Tiwa Savage
OlamideJune 4, 2022
7
You may have Missed
Load More
Facebook Twitter Messenger Messenger WhatsApp Telegram
Close
Naijapalaba
Manage Cookie Consent
To provide the best experiences, we use technologies like cookies to store and/or access device information. Consenting to these technologies will allow us to process data such as browsing behavior or unique IDs on this site. Not consenting or withdrawing consent, may adversely affect certain features and functions.
Manage options Manage services Manage vendors Read more about these purposes
View preferences
{title} {title} {title}