Akindele Bello Olufunke Ayotunde popularly known as Funke Akindele or Jenifa is a Nigerian actress and producer, funke Akindele was born on the 24th of August 1977 in ikorodu Lagos State, Nigeria. Her mother gave birth to three children, two girls and a boy,She is the second child of her mother. Funke Akindele’s mother is a Medical Doctor while her father is a retired School Principal. Funke obtained an Ordinary National Diploma (OND) in Mass Communication from the former Ogun State Polytechnic, now Moshood Abiola Polytechnic, She earned a Law degree from the University of Lagos. 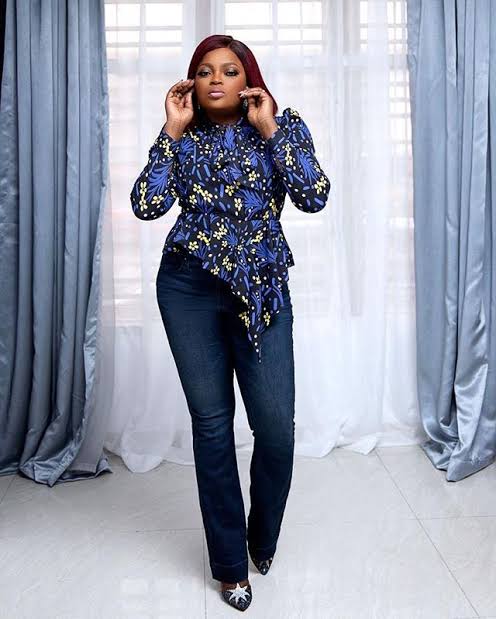 Funke Akindele won the the Africa Movie Academy for the Best Actress in a Leading role, She starred in the sitcom I Need to Know from 1998 to 2002, and in 2009, . She came into the limelight after she played the role of Jenifa in the movie titled Jenifa which earned her the nickname Jenifa. The Omo Ghetto trilogy contributed to her fame. Funke Akindele played the lead role in the show Jenifa’s Diary, for which she was named the Best Actress in a Comedy at the 2016 Africa Magic Viewers Choice Awards.

Akindele runs a nongovernmental organization known as the Jenifa Foundation, which aims at providing young people with vocational skills.

Akindele sign an endorsement deals with Dettol and Irokotv.In 2018, she was also signed as brand ambassador for Keystone Bank. In November 2019, Funke signed an endorsement deal with Waw Nigeria, a company that manufactures detergent and bar soap.

Funke Akindele got married to Adeola Kehinde Oloyede on the 26th of May 2012, The couple divorced in July 2013, citing irreconcilable differences. Funke Akindele remarried to married Nigerian rapper JJC Skillz in London in May 2016. Her pregnancy rumours were among the top searched results on Google search engine in August 2017. Funke Akindele gave birth to twin boys in December 2018 and has several step-children.

Funke was arrested and charged to court for hosting a birthday party in honor of her husband during corona virus lockdown In April 2020,  She later appeared in a Nigeria Centre for Disease Control video to raise awareness about coronavirus.The actress and her husband were sentenced to a 14-day community service after pleading guilty to violating the lockdown order.

Funke Akindele is worth $7.6 million . The talented actress and movie producer is one of the richest actress in Nigeria , she has lots of endorsement deals such as being an Ambassador to Irokotv.