El-Rufai, Kaduna state government has banned any forms of protest related to religious activities in the state. 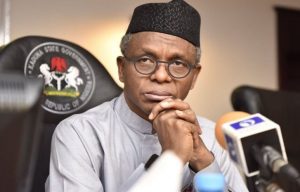 Meanwhile Naijapalaba.com recently reports that: A female student of College of Education was allegedly be@ten and burnt to de@th on allegations in sokoto

According to Samuel Aruwan, The state Commissioner for Internal Security and Home Affairs, he said the ban decision was done in consultation with the State Security Council and also effective immediately.

Aruwan said the government prohibits all forms of religious protests in view of some unpatriotic elements to organize series of for-and-against protests related to a recent security development in another northern state.

Recall protests rocked Sokoto city on Saturday May 14, over the detention of two persons linked to the gruesome k#lling of a Christian student, Deborah Samuel.

In another news, Northern Christian Elders Forum has condemned the k#lling of a 200-level Christian student of Shehu Shagari College of Education, Sokoto identified as student Deborah Samuel, by a mob for allegedly blaspheming Prophet Muhammad.

According to a group statement released on Friday, May 13 by its Chairman Ejoga Inalegwu demanded for the arrest and prosecution of k#llers of the Christian student.

NOSCEF described the k#lling as “murder in the robe of religion”, adding that “this should not be the usual rhetoric of condemnations and then the case is swept under the carpet with publicised arrests, no prosecution or jaundiced prosecution and letting off the hook, when the outcries die down.”

The statement read; “The death of Debora Yakubu (Samuel) is one too many by mobs wearing a cloak of religion in the North. In a country where there is a law, nobody, group or individuals has a right to take another’s life whatsoever, outside the due process of law.

“We also urge the government to make a public example and make a new statement by quickly bringing the perpetrators to book.

“This will (should) not be the usual rhetoric of condemnations and then the case is swept under the carpet with publicised arrests, no prosecution or jaundiced prosecution and letting off the hook, when the outcries die down.

“One day it is the videoed execution of Christians in the North because of a said k#lling of a terrorist in Syria, and next what should have been an internal WhatsApp class platform chat results in mob action murder, wearing the robe of religion in our dear North.

“NOSCEF commiserates with the family of Deborah Yakubu (Samuel) in their period of grief and this avoidable pain, and urge Nigerians to rally round them to comfort and lessen their grief.”

Tags
Kaduna State Government
OlamideMay 15, 2022
153
You may have Missed
Load More
Facebook Twitter Messenger Messenger WhatsApp Telegram
Close
Naijapalaba
Manage Cookie Consent
To provide the best experiences, we use technologies like cookies to store and/or access device information. Consenting to these technologies will allow us to process data such as browsing behavior or unique IDs on this site. Not consenting or withdrawing consent, may adversely affect certain features and functions.
Manage options Manage services Manage vendors Read more about these purposes
View preferences
{title} {title} {title}