The suspects arrested included an elderly woman and some young men caught with money allegedly used to induce voters.

According to Channels TV reports, some people were also arrested at a private residence with a book containing details of voters in a certain voting area. 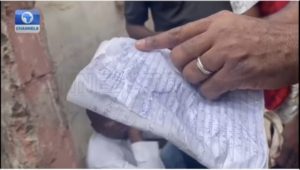 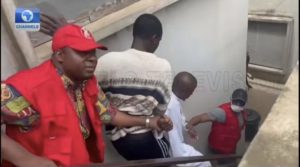 The suspects were reportedly paraded at the Oke Ori Omi Area Police Division of the Nigeria Police Force.

Watch the video below:

Meawhile, In other news, A group of ladies was seen in a video rejoicing after reportedly selling their votes in today’s gubernatorial elections in Ekiti state.

The video has gone viral and it’s causing uproar on social media. In the video, the ladies, who all held their permanent voters’ cards in their hands, are seen flaunting the money they made from the quick sale.

The females swung their wads of cash in front of the camera, grinning from ear to ear and making joyful noises.

The video has sparked outrage with many Nigerians berating the ladies for their actionSee some comments as you scroll,

@spreeclothing_uyo, “This is the major issues that needs to be worked on, make them know say even 50k per vote, e no go reach 2days e go finish na another 4years of suffer be DAT ooo ”.

@damie_iam, “no matter the campaign and preaching against vote selling, some people will still be greedy and adamant ”.

Tags
EFCC
OlamideJune 18, 2022
5
You may have Missed
Load More
Facebook Twitter Messenger Messenger WhatsApp Telegram
Close
Naijapalaba
Manage Cookie Consent
To provide the best experiences, we use technologies like cookies to store and/or access device information. Consenting to these technologies will allow us to process data such as browsing behavior or unique IDs on this site. Not consenting or withdrawing consent, may adversely affect certain features and functions.
Manage options Manage services Manage vendors Read more about these purposes
View preferences
{title} {title} {title}