The former Imo state governor, Senator Rochas Okorocha’s daughter, Uloma Nwosu has said that the Economic and Financial Crimes Commission (EFCC) had no legal justification to arrest her father on Tuesday, May 24. 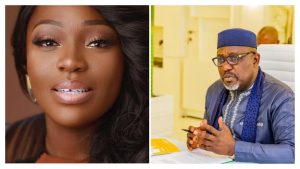 It can be recalled that on Tuesday, May 24, The EFCC invaded the Abuja residence of the presidential aspirant to effect his arrest after he reportedly jumped bail and refused to accept court processes from the commission.

While she was Speaking in an interview with Arise TV today May 25, she said the EFCC operatives failed to present any legal document or arrest warrant to justify breaking into their Abuja home and forcefully arresting the politician.

She said no one has heard from him since he was arrested at about 6.30pm on Tuesday.