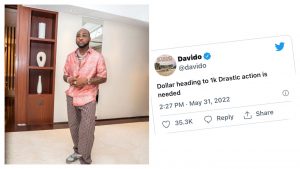 Naijapalaba.com report: “God is with you brother, you are in my prayers”- Davido Responds To Kizz Daniel’s Outburst About Envious Colleagues

Taking to his official Twitter page, the DMW boss projected that at this rate dollar will start exchanging for N1,000 soon.

According to him, there is a need for drastic steps to be taken before the naira depreciates further.

In other news, 30 BG boss, Davido, key activist for people supporting one another offered a word of advice to people.

On Saturday, May 21, 2022, David Adeleke, talented singer  who is popularly known as Davido, took to his social media platform to offer a word of advice to people on how they should and can do things. The 30BG Boss , who has been a key activist for people supporting one another, advises people to practice the act of being kind as both class and decency as humans can not be afforded as it does not have any specific price tag.

Continue reading: MUST READ: Davido Gives A Word Of Advice To People About Money

Tags
davido
OlamideJune 1, 2022
2,311
You may have Missed
Load More
Facebook Twitter Messenger Messenger WhatsApp Telegram
Close
Naijapalaba
Manage Cookie Consent
To provide the best experiences, we use technologies like cookies to store and/or access device information. Consenting to these technologies will allow us to process data such as browsing behavior or unique IDs on this site. Not consenting or withdrawing consent, may adversely affect certain features and functions.
Manage options Manage services Manage vendors Read more about these purposes
View preferences
{title} {title} {title}