If you have the chance to choose between Broda Shaggi a comedian and Timini Egbuson an actor purely based on one being a funny man vs the other being a fine man, which one would you go for? Funny or Fine?

So during a conversation on Inkblot’s Meet & Greet. 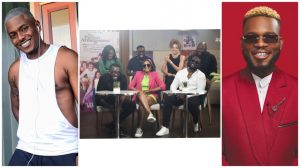 Here’s what was said:

Damola – We wanted 2 guys who were very very different. That the appeal on the surface of each person would not be obvious. See Pere, a beefcake. Then look at Bovi

Naz – Bovi is also a beefcake, how dare you! People actually believe that hot women are attracted to Bovi

Sharon Ooja – And that’s no cap. As his friend, I can vouch for him 100%. Women love funny men

Damola – I’ve always said this thing. If you can make a babe laugh, basically her eyes are closed half the time. She cannot see you. You will get married, you will have 5 children. That’s how I got married to my wife, I just kept making her laugh.

Sharon Ooja – The truth is guys like Bovi will walk into a place and a girl, maybe like me sitting down and trying to be like “oh nobody should talk to me”, he will come and make you laugh. And he will crack you. He’s likely the guy to talk to a girl first before even a guy that feels like “I’m a hunk” or “I’m Denzel”.

Eku Edewor – Bovi is handsome. We put this thing like “oh comics are funny and not these attractive men”, with women as well. If you’re the funny woman, you’re not the pretty woman. That is not the reality.

I think both Damola and Sharon’s points were absolutely right. But then again, I know a lot of women who would rather have fine men over funny men, which is also understandable, Eku did not lie also , because as a society, when somebody is seen as funny, we automatically just put them as “oh this one is funny, he/she cannot do romantic” whereas a lot of the most sought after people are actually funny people.

Everybody wants a person they can show off at the end of the day.

So the question is, In dating, would you rather go for FINE or FUNNY?

Tags
Funny guy Over fine guy Why women choose
OlamideMay 24, 2022
690
You may have Missed
Load More
Facebook Twitter Messenger Messenger WhatsApp Telegram
Close
Naijapalaba
Manage Cookie Consent
To provide the best experiences, we use technologies like cookies to store and/or access device information. Consenting to these technologies will allow us to process data such as browsing behavior or unique IDs on this site. Not consenting or withdrawing consent, may adversely affect certain features and functions.
Manage options Manage services Manage vendors Read more about these purposes
View preferences
{title} {title} {title}