On Friday, Lagos High Court sentenced a Dane, Peter Nielsen, to de@th by hanging for k#lling his Nigerian wife and child. 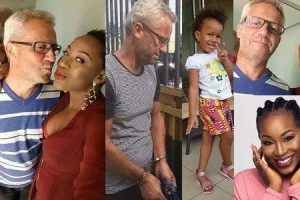 Nielsen, 54, was convicted on two counts of murder by Justice Bolanle Okikiolu-Ighile, brought against him by Lagos State Government.

Nielsen was sentenced to de@th by hanging on both counts by the judge.

The Dane was charged with the de@th of his wife , Zainab, and their three-year-old daughter, Petra.

However, Nielsen pleaded not guilty to the two-count charge of murder contrary to Section 223 of the Criminal Law of Lagos State, 2015.

Trending
5 BBNaija Housemates Who Look So Much Like Their Mother(photos)
Tags
Court sentences Dane to de@th
OlamideMay 20, 2022
1,161
You may have Missed
Load More
Facebook Twitter Messenger Messenger WhatsApp Telegram
Close
Naijapalaba
Manage Cookie Consent
To provide the best experiences, we use technologies like cookies to store and/or access device information. Consenting to these technologies will allow us to process data such as browsing behavior or unique IDs on this site. Not consenting or withdrawing consent, may adversely affect certain features and functions.
Manage options Manage services Manage vendors Read more about these purposes
View preferences
{title} {title} {title}