Skip to content
Discussion Of Burial Practice In Nigeria

The Bible stated that it is better to be at the house of mourning than to be at the place of feasting, this is because burials ought to humble the individual than feasting. But in Nigeria today, burial is a place of feasting, you attend burials and return learning no lesson. Any burial that prioritizes feasting over lesson is not a Christian burial, it is “pagan” tradition, and should be referred to as such and not as Christian burial.

the former Chief Of Staff to President Muhammadu Buhari was laid to rest in the most humble burial ceremony a typical Nigerian will regard as unbefitting of a man of his status: wrapped in a piece of white linen, laid in the ground without a coffin, covered with earth and all is done. Simple! This is how it is with most Islamic burials, you attend or watch and leave there absorb in your own thought about how life, in the end, amounts to nothing. That cannot be said about some Christian burials.

The body of late Chief Of State to President Muhammadu Buhari, Abba Kyari, lowered into the grave during his burial ceremony in Abuja. He was buried according to Islamic rites. (Image: Premium Times Nigeria)

Most Nigerians understood the world in only two worldviews, Islam and Christianity, you are either one of these; everything else must either be according to Islam or Christianity: burial is simply considered as either the simple and humbling Islamic burial or the grandiose Christian burial. This dual view of Nigerian reality is faulty, it shows the lack of understanding of history which reveals what many erroneously refer to as Christian Burial is indeed “pagan” burial shroud in a Christian ceremony.

The true Christian burial is inspired by the traditional Jewish burial which in most cases was as simple as the Arab burial which inspired the Islamic burial tradition. The dead are laid to rest wrapped in a simple shroud and buried, either in a grave or encaved. No fanfare, no music, no dancing, no eating and drinking. Most biblical figures were buried in such manner, even Jesus burial was very simple – the luxury accorded his body is been laid in a cave which was reserved for the rich. The apostles mourned Him without merriment or feasting.

Dancing pall-bearers are features of what many regards as Christian burial ceremony (image: Nairaland)

The practice of celebrating the dead is traced to other traditions other than those of the Jews and Arabs, especially that of ancient and traditional Africa. A simple reflection will reveal that almost all traditional Nigerian societies celebrate the death of love ones, especially the elderly. This was considered as a necessity to celebrate a life well spent and also to induct the deceased into the sacred realm of the ancestors. Death – especially of the elderly – should inspire joy and not sorrow, death deserves feasting and not mourning.

With the mass conversation of Nigerian communities into Islam and Christianity, the tradition of celebrating the death begins to fade out, especially in the northern part of Nigeria: in the north, almost all communities that accepted Islam bury their dead love ones, young or elderly just as Abba Kyari was buried. Among the Christians in the north, the European burial style is adopted as it was regarded as the Christian type of burial: the corpse is dressed in his or her finest cloth, placed in a coffin and then buried. If the deceased happened to be elderly, in most cases it calls for feasting. But the celebration and feasting are not as demanding as it is in most communities in southern Nigeria.

In southern Nigerian, Christianity did not completely erase the tradition of celebrating the dead as it has done in the North. Most southern Nigerian communities, except among the Yoruba where a significant number of them are Muslims, the people are dominantly adherents of the Christian faith. Curiously, the uphold so much of their traditional practices than other communities in northern Nigeria. For example, naming in this societies are largely traditional and native, marriage is almost considered void without a traditional wedding ceremony, and burial is dishonourable if the dead are not given a grand burial which involves a feast.

Because most southern Nigerian communities misunderstood the north as entirely Muslims and associate the humbleness of burial in the region as “Islamic”, they regarded their burials as “Christian burial”. But what is Christian about the burial is the mass and the funeral service and the final laying to rest which is officiated by a priest. The feast: music, dancing, eating, drinking, wear to-match clothing, that goes on after burial and throughout the “mourning” period had no biblical justification.

Christian burial ought to teach a lesson and not burden the family, in southern Nigeria the news of the death of the elderly often lead to despair as family members begin to worry how to raise fund to organize a befitting burial. Some burials cost millions of Naira to organize: to pay the morgue for keeping the body pending when the family can afford to bury the deceased, bodies are sometimes kept for up to a year or more and the bill piles up the longer the body is preserved; funeral homes are contracted, with siren ambulances and dancing pall-bearers; DJs and live bands are hired to entertain the guest, the mourners!

Muslims praying to the body of a deceased before burial (image: NavigatingNigeria)

Caterers are also hired to feed the guest. Matching clothing is sewed for family members and friends, after burial ceremony the “mourners” are shared souvenirs. Many families collect loans to bury love ones, and after burial they begin to worry how to they these debts. Bible encouraged that it is better to be in the house of mourning than feasting, but what people call Christian burials are a combination of both, mourning and feasting, the later prominently observed than the former: and erased whatever lesson(learnt) learnt from the burial ceremony.

It is understandable why people will not want to call it “traditional” or “pagan” burial, because they are religious people, devout Christians and Muslims who wouldn’t want the blemish of heathenism associated to them. The trick has always been to recruit a priest or an imam to give the practice a Christian or Islamic tag. But what is mostly referred to as Christian burial by many is in reality “traditional burial” or pagan burial. It is too demanding and expensive, many do not want it, but it is also a sign of prestige hence instead of the practice to die out it is becoming more enshrined. Who wouldn’t want to give his parent the most befitting burial? 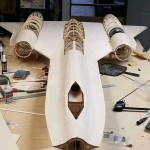 I am a Nigerian, based in Abuja. am a student studying BSC aeronautical engineer in an international college of aeronautics Lagos
I love writing and my hobbies compliments; they include reading, research and watching movies, basic robotic, drone technology.

34 thoughts on “Call It Tradition Burial Not Christian Burial: A Discussion Of Burial Practice In Nigeria”