Suspected attackers of the St. Francis Catholic Church in Owo, Ondo State, have been reportedly arrested.

A video which showed moment Olowo of Owo announced arrest of those who attacked a Catholic Church in the Ondo, has been shared online.

One of them could be heard saying: “They want to take them (suspects) to Akure. The youths are angry.” 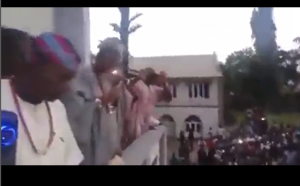 Recall that the state government said last Sunday’s attack on St. Francis Catholic Church in Owo left over 20 people dead and over 50 people injured. It has also been linked to ISWAP terrorists.

Oluwo of Owo, Gbadegesin Ogunoye III announced arrests of suspects linked to the shooting on Thursday June 9, as members of the community cheered on.

Tags
Olowo Of Owo
OlamideJune 10, 2022
486
You may have Missed
Load More
Facebook Twitter Messenger Messenger WhatsApp Telegram
Close
Naijapalaba
Manage Cookie Consent
To provide the best experiences, we use technologies like cookies to store and/or access device information. Consenting to these technologies will allow us to process data such as browsing behavior or unique IDs on this site. Not consenting or withdrawing consent, may adversely affect certain features and functions.
Manage options Manage services Manage vendors Read more about these purposes
View preferences
{title} {title} {title}