Former Governor of Lagos State and Nigerian politician and National leader of the All Progressives Congress party, Asiwaju Bola Ahmed Tinubu has emerged winner of the APC Presidential Primaries With over 1000 votes count, 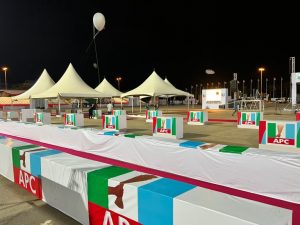 The convention which held at the Eagles Square in Abuja, since Monday, June 6th, 2020, saw Presidential aspirants all under the APC party vying for the slot to represent the party in the forthcoming 2023 Nigerian General Elections.

While a lot of aspirants stepped down for Bola Ahmed Tinubu, others who didn’t were left to contest for the spot by voting. Voting ended in the early hours of Wednesday morning, and sorting and counting of the votes followed.

While as at the time of filing this report, the number of votes are being cross-checked following an initial count, Asiwaju Bola Ahmed Tinubu has led in numbers and as such, becomes the winner of the Primaries and will be representing the APC party in the 2023 General Elections.

More details as it unfolds.