On Saturday, May 21, One person has been confirmed de@d after a three-storey building under construction collapsed on Lagos Island. 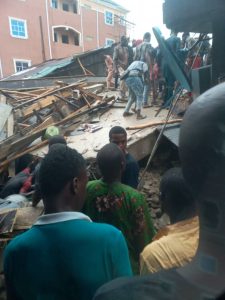 Following reports from the Lagos State Emergency Management Agency LASEMA, the building located at 4 Alayaki Lane, Lagos Island had been captured by the LASBCA District Office and served with all Statutory Notices, Sealed at District and Central Enforcement Level.

According to the Vanguard newspaper, one person was confirmed de@d while two others were rescued alive during a rescue operation by personnel of the Lagos State Emergency Management Agency (LASEMA).

Further investigation determined that the developer had continued clandestine operations mostly at night and weekends.

An unconfirmed number of people are still trapped inside the building. Two people have been rescued alive while another was recovered de@d.

In other news, Recall On Sunday , May 1st, A tragic incident happened in Lagos state. A three storey building collapsed on Ibadan Street, Ebute Metta, Lagos State and many residents were trapped in the building . Videos from the scene show locals making efforts to reach those trapped.