Popular actor, Blossom Chukwujekwu Ex- wife, Maureen has shared screenshots of some of the offensive messages she received after news of the actor’s marriage to his new wife hit the internet.

Naijapalaba earlier reports: “It is better to marry an Ehinome than a woman who twerks on Instagram” – Twitter influencer, Sally blast those body-shaming Blossom’s new wife 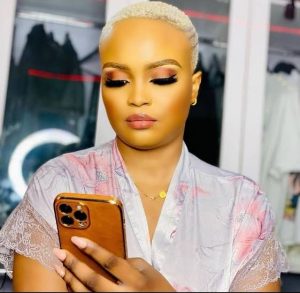 After years of his divorce with Maureen, Chukwujekwu found love again and tied the knot with his new wife, Pastor Ehinome, on Friday, May 20 in Benin, Edo state.

Taking to his Instagram page, The actor share beautiful photos of himself and his wife. However, moments later, Maureen revealed that her DM has been buzzing since the photos surfaced online.

She has now shared screenshots of some of the messages she received, see below, 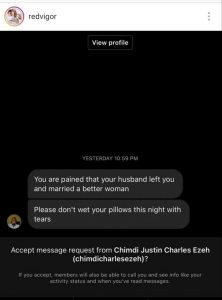 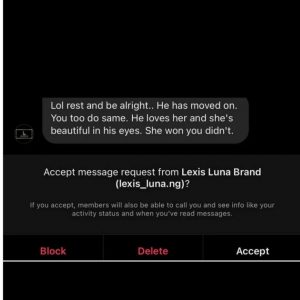 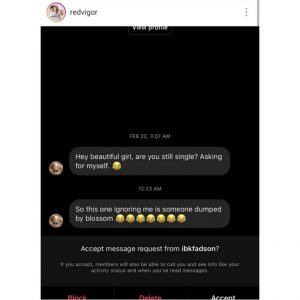 In other news, Uche Maduagwu, Nollywood actor, has highlighted some of the alleged troubles his colleague, Blossom Chukwujekwu, allegedly faced in his marriage to his ex-wife.

According to Maduagwu, In an Instagram post while congratulating the actor on his new marriage, he said Chukwujekwu cried every night in his past relationship.

Maduagwu claimed Chukwujekwu went through a lot in the relationship but had to pretend to the public that all was well. Maduagwu also commended the actor for never coming out to drag his estranged wife even after their split.

Tags
Maureen Shares messages She received
OlamideMay 21, 2022
1
You may have Missed
Load More
Facebook Twitter Messenger Messenger WhatsApp Telegram
Close
Naijapalaba
Manage Cookie Consent
To provide the best experiences, we use technologies like cookies to store and/or access device information. Consenting to these technologies will allow us to process data such as browsing behavior or unique IDs on this site. Not consenting or withdrawing consent, may adversely affect certain features and functions.
Manage options Manage services Manage vendors Read more about these purposes
View preferences
{title} {title} {title}