The students of the Federal University of Akure popularly known as FUTA had been experiencing subsequent attacks from thieves who had been extorting and robbing them off their properties.
The repeated extortion and attacks by the thieves had triggered the students to hold a massive protest to the university authorities and the government, so as to provide adequate security for the students .

Read also: Killed Over 20 People In North-West, But I Have Repented – 21 year Old boy confesses

This protests yielded negative results as the attacks and extortions still kept occurring.
Fortunately, a guy who was suspected to be one of the thieves was caught by the students, he was beaten to stupor that his face was totally disfigured. It was said that the students bought him energy drink to replenish his energy when they noticed that he was getting tired of the beating.
See image below^^^ 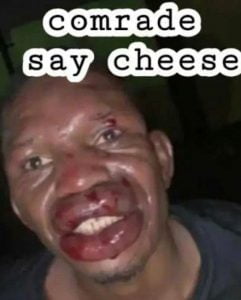 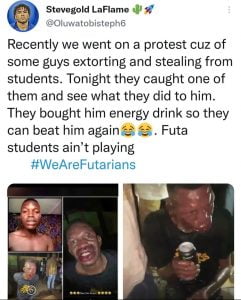 FUTA Students gave him the beating of his life after allegedly caught Extorting and stealing from students.. Then he was given a break to take energy drink, so as to regain lost strength… What can u say about this? pic.twitter.com/oDiKNE2VUU