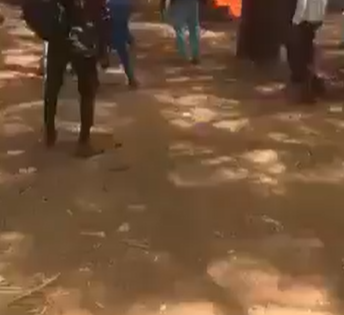 It was gathered that Deborah, who is said to be residing with her parents in Old Airport Road area of Sokoto metropolis, was accused of insulting Prophet Muhammad (SAW), during a hot argument with her schoolmates in school.

”She was having an argument with some of her schoolmates over their ongoing examination and when she was asked how she managed to pass her exams, she said it was Jesus. She was asked to withdraw the statement and apologise which she refused.

The school security intervened, and took her to their post but they were overpowered by students after which she was k#lled in the process. After k#lling her, her body was burnt on the school premises”a source said

The commissioner of information, Isah Bajini Galadanchi, While he was Addressing newsmen at Government House in Sokoto, he, said the state government has ordered security agencies to investigate the incident to ascertain its remote causes. It also ordered the immediate closure of the college.

“It has come to the notice of Sokoto State Government, the unfortunate incident that took place at the Shehu Shagari College of Education (SSCOE) Sokoto in which a Student of the College, lost her life.

The Government has ordered the immediate closure of the College.

Already, the State Governor, Rt Hon. Aminu Waziri Tambuwal has directed the Ministry of Higher Education, and relevant Security agencies in the State to commence investigations into the remote and immediate causes of the incident and report back to the Government.

Meanwhile, Governor Ammu Waziri Tambuwal has called on the people of the State to remain calm and maintain peace, as the Government would take appropriate actions on the findings of the investigations by the relevant authority” Galadanchi said 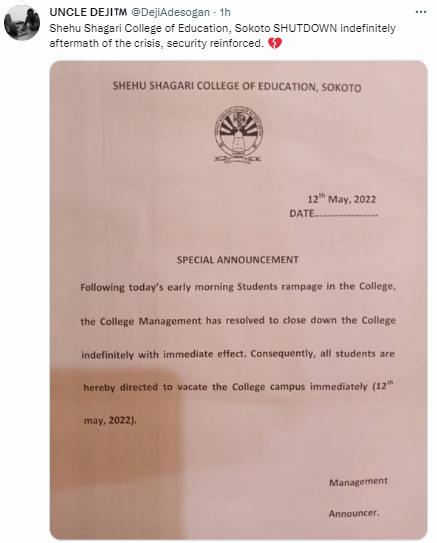