Chris Ngige, The Minister of Labour and Employment, has announced his withdrawal from the 2023 presidential race. 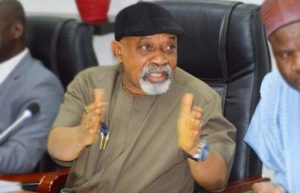 The minister of Labour and Employment make this announcement barely 48 hours after President Buhari ordered all members of the Federal Executive Council interested in running for elective positions in the 2023 general elections, to tender their resignation on or before May 16.

Ngige while announcing his withdrawal from the race today, May 13, said he took the “momentous decision” in the interest of the nation and to enable him to concentrate on his job.

“Today, 13th May 2022, I had an audience with the president, Muhammadu Buhari, as a follow up to the one I earlier had with him on 11th May 2022. Having also consulted widely with my family, constituents, supporters and well-wishers, it is my pleasure to announce the withdrawal of my interest and earlier decision to contest the office of the president in the 2023 general election.

As a result of this, I will NOT be participating in any of the internal party processes of the said election, starting with the primary.”he said

Ngige said he chose to pull out of the race to assist the president and the federal government to “weather the difficult last lap” of the administration.

Tags
Minister Of Labour withdraw from Presidential race
OlamideMay 13, 2022
52
You may have Missed
Load More
Facebook Twitter Messenger Messenger WhatsApp Telegram
Close
Naijapalaba
Manage Cookie Consent
To provide the best experiences, we use technologies like cookies to store and/or access device information. Consenting to these technologies will allow us to process data such as browsing behavior or unique IDs on this site. Not consenting or withdrawing consent, may adversely affect certain features and functions.
Manage options Manage services Manage vendors Read more about these purposes
View preferences
{title} {title} {title}