Chukwuemeka Nwajiuba, Former minister of state for education, who recently resigned from buhari’s cabinet has said that the north would support the bid for a south-east presidential candidate on the platform of the All Progressives Congress if candidates from the south-west quit the race. 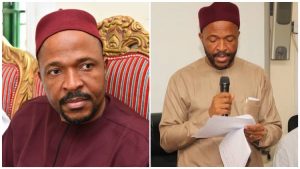 The former minister of state education stated that the South-East should produce the next President on grounds of national justice and fairness.

Read also: Just In: Minister of State for Education, Emeka Nwajuiba resign from his position to pursue his political ambition for the 2023 presidential election

Nwajiuba also said it doesn’t make sense that the South-West would be asking for power to be ceded to the South and they should be the beneficiaries.

Speaking in an interview with This Day, he said;

“There are three people from the north who purchased the APC presidential forms. The president of the senate, Ahmad Lawan;  the governor of Kogi state, Yahaya Bello; and the governor of Jigawa state, Abubakar Mohammed Badaru.

“They all have the right credentials to be Nigeria’s president. They are men of foresight. They are from the north-east, north-central and north-west.

“They are possibly in the contest to make a statement but if we are talking about national justice and fairness, we should only be thinking of the south-east. This is because it is the only zone in the south that had not produced a president since 1999.

“However, for them to be seeing about eight people from the south-west suddenly laying claims to the same argument they had against the north, makes it look very silly.

“This is because you cannot be accusing the north of something you are also perpetrating. Olusegun Obasanjo had been president for eight years; Osinbajo has been vice president since 2015.

“I am sure if the south-west pulls out of the presidential race, aspirants from the north would also rest their ambitions and allow the south-east to produce Buhari’s successor in 2023.”